This summer, His Beatitude attended the CRANS MONTANA FORUM ON CENTRAL TO FAR-EASTERN EUROPE: Building the New World Power from June 29 to July 1, 2016 – Vienna (Austria) 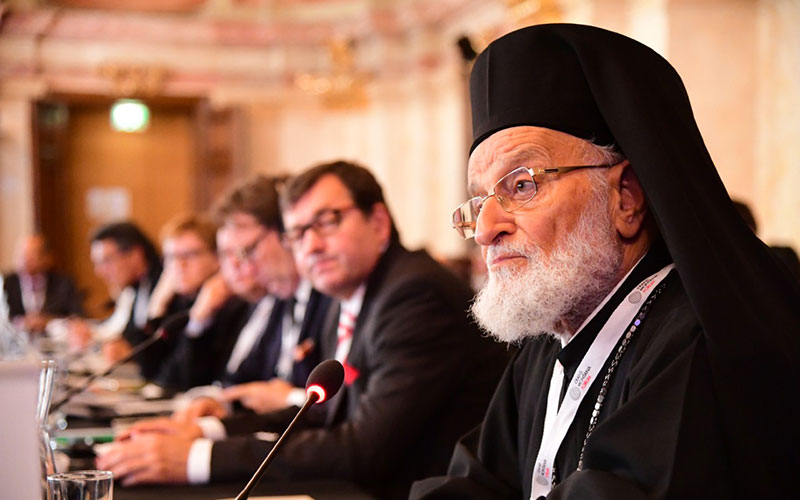 His Beatitude Gregorios III Patriarch of Antioch and All the East, of Alexandria and of Jerusalem

Big names get together at the Crans Montana Forum

(Excerpt from EuroNews.com) - Politicians, business leaders and representatives of international organisations came together in the heart of Vienna, Austria, for the 27th annual Crans Montana Forum.

Attendees discussed a wide range of subjects from the role of women in decision-making to renewable energies – the main angle being the rise of central-eastern Europe as a new power – and the migration crisis.

One of the most memorable comments was that of Gregorios III, the Melkite Greek Catholic Patriarch of Antioch and All the East, Alexandria and Jerusalem, who had a – perhaps surprising – view on the reception of Syrian refugees in Europe.

“This is a double-edged sword. We are not happy when we hear ‘Syrians welcome,’ because we want them to stay with us at home, especially when we see all the problems they have to go through,” he explained.

“But I think Germany, especially Germany, and Sweden really invited too many people. They should have been more circumspect at the beginning. My own relatives lived in very good security conditions, under my protection, and even they found an excuse to leave!”

Most attendees agreed that peace in Syria should be the long-term solution….

Further, see the Report made by Euronews on the occasion of the Crans Montana Forum 27th Annual Session, held in Vienna in June 2016, in which His Beatitude appears: http://www.cmf.ch/the-crans-montana-forum-in-vienna-on-euronews/

Then, in his role as Spiritual Protector of the Order of Saint Lazarus, His Beatitude attended the Lazarus-Tage, a meeting with international guests, friends and sponsors, hosted by the Grand Priory of Saint Lazarus in Germany, from 8-10 July at St Paul’s Church, Munich, Germany.

High points of the gathering included: a Vigil presided over by His Beatitude at 9p.m. on Friday and a pontifical Divine Liturgy of the Eastern rite at 3p.m. on Saturday, together with an Investiture at which the new Prior of the Order, Lothar Kestler, was inaugurated, new members were admitted and existing members promoted within the Order. Later that evening, His Beatitude and guests attended a reception and buffet dinner at the Hacker Pschorr Bräuhaus, Munich. 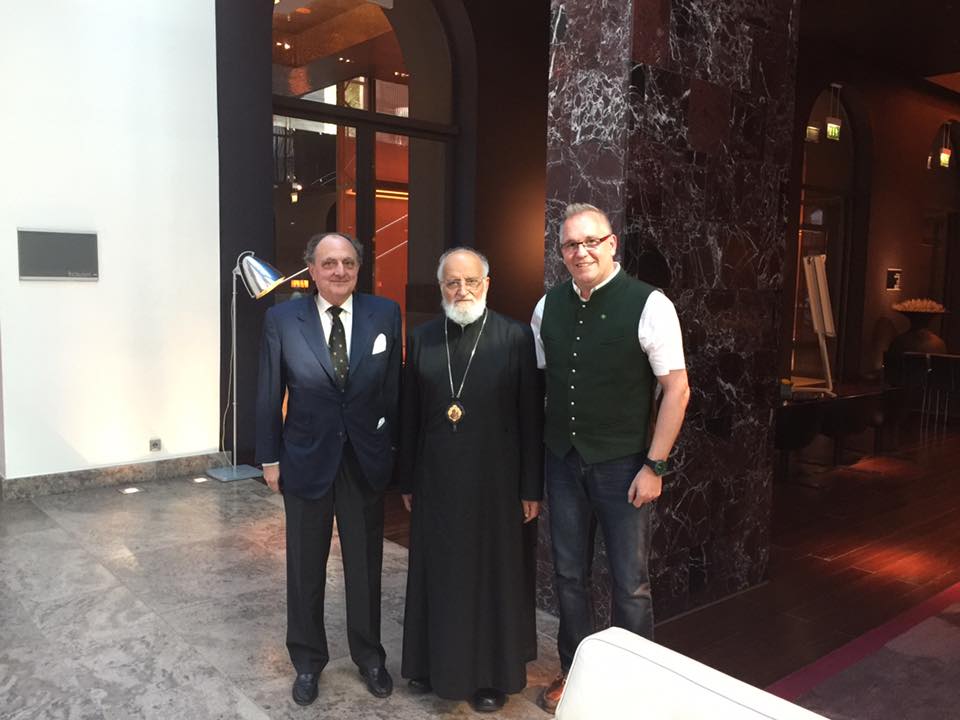 Later on July 24th, His Beatitude visited Sachsenhausen to celebrate the Divine Liturgy and meet with Syrian refugees in Germany. Below follow extracts from some reports in the German and Catholic press:

FRANKFURT - The head of the Melkite Greek Catholic Church, Gregorios III Laham from Damascus, celebrates on July 24th, 2016, at noon, a divine service in the Church of the Holy Apostles, Sachsenhausen. Catholic refugees from the region of Syria and Iraq are invited to the liturgy in the Byzantine rite. Following the church service, an encounter with the refugees is planned.

Gregorios III Laham is visiting this week the German Episcopal Conference in Bonn. He is Patriarch of Antioch and All the East, of Alexandria and of Jerusalem and head of the Melkite Greek Catholic Church, which is one of the 23 Eastern Catholic Churches United with Rome. The Church numbers about 1.6 million believers worldwide.

Patriarch says: Refugees should remain true to their faith

FRANKFURT.- Patriarch Gregorios III Laham has urged Christians who have fled from Syria to remain true to their faith in Germany. In order for Germany to offer them a new home, they would have to integrate well into Germany. In a church service on Sunday in Frankfurt-Sachsenhausen, he explained that life in Germany might be initially difficult, since Christians are in a small minority among many Muslims in asylum shelters. It was also distressing that families had been torn apart by their flight.

In his sermon Gregorios III promised that the Church in Germany would not abandon the faithful who had fled. In the next few months, regular church services and meeting-places for the Melkite Church faithful would be built in consultation with the German Bishops’ Conference.
…About eighty people - including many refugees - had come to worship at the Byzantine rite Liturgy. A small choir led the singing of the liturgy.

The patriarch with the white beard stands before the altar, holding a staff with a cross in his left hand, another cross in his right. He wears a golden crown and a gold-and-red robe, and speaks Greek and Arabic. Such an unusual image was offered to the visitors to the Church of the Holy Apostles in Sachsenhausen on Sunday afternoon.

The head of the Melkite Greek Catholic Church, Gregorios III Laham from Damascus, celebrated the Divine Liturgy according to the Byzantine rite. About 100 believers attended the liturgy, including Catholic refugees from the region of Syria and Iraq…

Walid Morani and Saiby Mawas have travelled from Regensburg to the liturgy. The two 32 year-old Syrians have not been long in Germany. Originally, they come from Damascus. Morani, who is an electrical engineer, has found work with a visa. Mechanical engineer Mawas has had multiple interviews, but obtained no job since he has had to wait a year for his residence permit.

As Christians in Damascus, it had been going well for them, they say. "We had everything: freedom, no problems," said Morani. But they lament the lack of integration in Germany. In Bavaria they have not so far been able to find any German friends.

On Saturday, 23 July, His Beatitude attended part of Ex Oriente Lux – Meeting with the Christian East (23-27 July) an event held in co-operation with the Salzburg Festival, the Centre for the study of the Christian East, University of Salzburg, and Pro Oriente, Salzburg at the Mozart House, Karl-Böhm-Saal, Vienna, Austria. His Beatitude was one of two main speakers on the opening day. First, His Eminence, Metropolitan Arsenios of Austria, representative of the Ecumenical Patriarch, Bartholomew I, spoke on The Meaning of Orthodoxy for Europe. Then, His Beatitude, Patriarch Gregorios III spoke on The Responsibility of Europe for Christians in the Middle East.

Professor Dietmar Winkler, a Salzburger expert on the Eastern Churches, had collaborated in the preparation of these Disputationes, as they are termed, and himself spoke on the following day of the “bewildering array” of Eastern Churches.

The following days also included discussion of monastic life, and Eastern Church spirituality in art and culture, with contributions from Serbian and Greek bishops. Sacred music formed part of the Festival, beginning with Haydn’s Creation on the first evening in the Great Festival Hall. This year’s focus was on music from the Eastern Christian tradition, with Russian spiritual choral music and Marian hymns from the East.