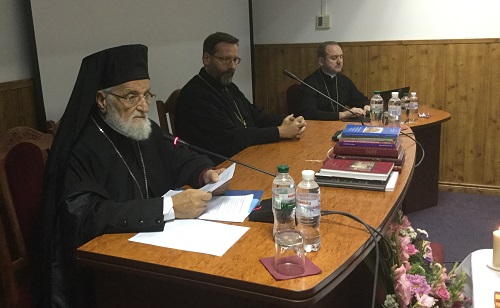 Patriarch Gregorios III brought fraternal greetings and emphasised that relations with the UGCC are most important for his Melkite Greek Catholic Church and for other Christian Churches besieged by war in the Middle East. Discussions with the Patriarch centred around the topic of armed conflict and its devastating effect in Syria and Ukraine. Addressing the synodal fathers Patriarch Gregory emphasised that the UGCC is the largest of the Eastern Catholic Churches and that closer cooperation between Greek Catholics in the Middle East and Eastern Europe should take the form of regular episcopal encounters. He also proposed the creation of a joint formation programme for future priests conducted in the Holy Land, the creation of joint theological and canonical commissions, and other initiatives.

The leaders of the two Churches expressed heartfelt solidarity with each other's suffering flocks and pledged to foster closer relations. His Beatitude Sviatoslav, on behalf of the bishops, thanked Patriarch Gregorios for his kind words of fraternity and solidarity. This was Patriarch Gregorios's third visit to Ukraine. His charismatic words and energetic manner have endeared him to the people of Ukraine.

“If anyone thirsts, let him come to me and drink. Whoever believes in me, as the Scripture has said, ‘Out of his heart will flow rivers of living water.’" (John 7:37-38 ESV)

When You were baptized in the Jordan, O Lord, * worship of the Trinity was revealed, * for the Father's voice bore witness to You, calling You His “beloved Son”, * and the Spirit in the form of a dove confirmed the certainty of these words. * O Christ God, * Who appeared and enlightened the world, glory to You! (Troparion, Tone 1)

You have appeared to the whole world today, * and Your light, O Lord, is signed upon us, * who with knowledge praise You in song: * "You have come, and You have appeared, O Unapproachable Light." (Kontakion, Tone 4)

Theophany is a Greek word meaning "manifestation or appearence of God".

I pray Thee, compassionate Lord, do not allow me to be condemned because of the unworthy and ungrateful manner in which I contemplate the great mysteries that Thou hast revealed to Thy saints and through them to me, a sinner and Thy unworthy servant. For see, Lord, Thy servant stands before Thee, idle in everything, speechless, as one who is dead; and I do not dare to say anything more or to presumptuously contemplate further. But as always I fall down before Thee, crying from the depths of my soul. . . .