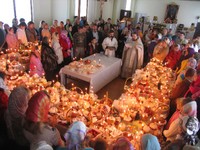 Orthodox believers in China celebrated the great holiday Christ's radiant resurrection. In Beijing, in the old building of the Red Fangzi, on the territory of the Embassy of the Russian Federation to the P.R.C. (Peoples' Republic of China) in the most numerous parish in China — there was a solemn Paschal procession and divine liturgy. Over 300 people participated in the procession. The divine service was served by Hieromonk Venedikt (Limonov), who came to Beijing from the Vladivostok diocese (from the city of Ussurisk).

The divine services of Passion Week took place in the Red Fangzi beginning from April 4th. On Holy Wednesday, Hieromonk Venedikt performed the sacrament of Holy Unction (Soborovanie) (over 40 people were annointed).

On Great Thursday, on the day the Mystical Supper is remembered, the Divine Liturgy of St Basil the Great was served. The matins of Great Friday with the reading of the 12 gospels took place on Thursday evening. On the Great Friday — on the day of the crucifixion and death of the Savior - vespers with the rite of bringing out Christ¡'s shroud and Matins of great Saturday with the rank of burial.

On the holiday of Annunciation — Saturday, April 7th — over 80 people received communion at Divine Liturgy. After Liturgy, Father Venedikt blessed Kulichi (Paschal breads), Paschal cheese dessert and Paschal eggs. Parishioners tried their best to decorate the the breads they prepared and to color eggs, observing Russian traditions under conditions of living in China .

The Red Fangzi was adorned for Pascha: new candlesticks appeared; a spotlight illumined a 3 meter high image of Christ's resurrection; the image, in a wooden case with a glass cover, was placed behind the altar.

At 11:30 p.m., the Paschal midnight service began in the Red Fangzi — a solemn procession with banners, lamps, gospel, icons — and the singing of Paschal stikhira "Your resurrection, O Christ our Savior" passed near the wall of Red Fangzi to the devotional cross in the Embassy park. At the end the believers stopped before the closed central doors of the Red Fangzi, as if before the entrance to the Lord¡'s grave. In the night sky of Beijing the priest exclaimed: "Christ is Risen!". And joyous voices replied: "Truly, He is Risen!"

During the Liturgy the gospel was read in Church Slavonic, Russian, French, English, German and Chinese, since Orthodox citizens of various countries participated in the Liturgy ( Russia, France, the Ukraine, Greece, Serbia, Poland, and the USA ). More than 80 received communion during the Liturgy. Before Pascha - on April 3rd, with the blessings of ALEXY, the Most Holy Patriarch of Moscow and all Russia, a devotional cross was placed in the park of the Embassy of the Russian Federation to the PRC, on the very spot of China's first Orthodox church, which later became the temple of All Holy Martyrs of the Russian Spiritual Mission. A memorial plaque depicted the temple and briefly described its history. On Holy Wednesday, the devotional cross was blessed by Hieromonk Venedikt.

Blessed are You, O Christ our God, * Who has shown the fishermen to be all wise, * by sending down to them the Holy Spirit, * and through them You have caught the whole world in Your net. * O Lover of Mankind, glory to You. (Troparion - Tone 8)

When the Most High descended, confusing tongues, * He divided the nations; * but when He distributed the tongues of fire, * He called all to unity; * and, with one voice, * we glorify the Most Holy Spirit. (Kontakion - Tone 8)

Adorned with the blood of Your Martyrs throughout the world, * as with purple and fine linen, * Your Church cries out to You through them: * "Send down Your compassions upon Your people. * Grant peace to Your commonwealth and great mercy to our souls." (Troparion - Tone 4)

As the first-fruits of nature to the Planter of Creation, * the whole world offers to You, O Lord, the God-bearing martyrs. * Through their prayers and the intercession of the Mother of God * preserve Your commonwealth, the Church, in profound peace, O Most Merciful One. (Kontakion - Tone 8)

The Seraph could not touch the fire's coal with his fingers, but just brought it close to Isaiah's mouth: the Seraph did not hold it, Isaiah did not consume it, but us our Lord has allowed to do both.