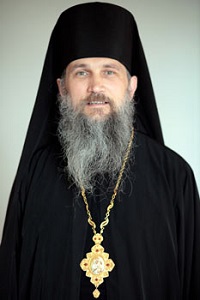 vatican.va - The Holy Father has appointed as bishop of the eparchy of Saint Nicholas of Chicago of the Ukrainians (United States of America) His Excellency Msgr. Venedykt (Valery) Aleksiychuk, M.S.U., transferring him from the titular see of Germaniciana and the office of auxiliary of the archieparchy of Lviv of the Ukrainians.

Msgr. Venedykt (Valery) Aleksiychuk, M.S.U. was born on 1 January 1968 in the village of Borshchivka, in the region of Rivne, Ukraine. He attended the major seminary of Drohobych and on 29 March 1992 he was ordained a priest.

In 1993 he was received in the Univ Holy Dormition Lavra of the Studite Rite and on 21 December 1995 he gave his first vows. He obtained a doctorate in spiritual theology from the Catholic University of Lublin, Poland.

He exercised his ministry in the parish of Bystrytsia (deaconry of Drohobych); in Belarus in Polock, and in the in parish of Vitebsk (1994-1996); and in Canada (1996-1999). He has served as Igumeno of the Lavra of Univ (2000 and re-elected in 2005); member of the commission of the Major Archbishop for Monasticism (2004); and administrator of the parish of St. Nicola Peremyshlany (2004). Since 2007 he was head of the secretariat of the Council of Monks of the Ukrainian Greek Catholic Church; president of the liturgical council and president of the major superiors of male religious institutes of the Ukrainian Greek Catholic Church.

He was elected as auxiliary bishop of Lviv of the Ukrainians on 3 August 2010, and was consecrated on the following 5 September.

Blessed are You, O Christ our God, * Who has shown the fishermen to be all wise, * by sending down to them the Holy Spirit, * and through them You have caught the whole world in Your net. * O Lover of Mankind, glory to You. (Troparion - Tone 8)

When the Most High descended, confusing tongues, * He divided the nations; * but when He distributed the tongues of fire, * He called all to unity; * and, with one voice, * we glorify the Most Holy Spirit. (Kontakion - Tone 8)

Adorned with the blood of Your Martyrs throughout the world, * as with purple and fine linen, * Your Church cries out to You through them: * "Send down Your compassions upon Your people. * Grant peace to Your commonwealth and great mercy to our souls." (Troparion - Tone 4)

As the first-fruits of nature to the Planter of Creation, * the whole world offers to You, O Lord, the God-bearing martyrs. * Through their prayers and the intercession of the Mother of God * preserve Your commonwealth, the Church, in profound peace, O Most Merciful One. (Kontakion - Tone 8)

"One gives freely, yet grows all the richer; another withholds what he should give, and only suffers want." (Proverbs 11:24 ESV)

“Only one sin is nowadays severely punished: the attentive observance of the traditions of our Fathers. For that reason the good ones are thrown out of their places and brought to the desert.” (ep. 243)