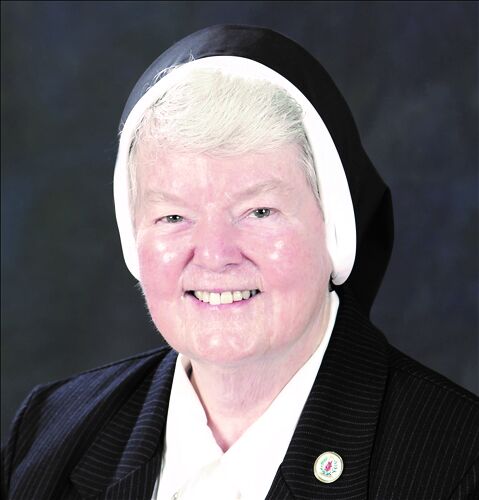 Sister Regina (Claire Marie) Adams took the final steps of her journey into eternal life in the late evening of Wednesday, February 3, 2021. Entering the hospital with some health problems, she fully expected to return to her mission at St. Mary's in Wilkes-Barre. The Lord, whom she served so faithfully, however, had other plans for her and took her swiftly to Himself from there.

Sister Regina was born in Trenton, N.J., a daughter of the late Michael and Anna Anchak Adams. She entered the community from St. Mary's Byzantine Catholic Church in Trenton February 4, 1957, and made her Final Profession of Vows on August 26, 1962.

For about half of her religious life, Sister Regina spent her energies in teaching, and she was able to convey her love of this ministry whether her students were in the primary grades or the upper ones. Her abilities came into play as she also managed the duties of principal when necessary. Sister Regina's zeal for learning was matched by her enthusiasm for science, evidenced by her interest in the PA Jr. Academy of Science. Here, her students always placed favorably in these competitions.

Further, Sister's talent for music served her well in her later years of parish ministry when she was often called upon to cantor for the Divine Services. She had a strong voice and one that was easy to follow. Not surprisingly, sports also had a prominent place among Sister Regina's interests. Anything connected with Notre Dame or the Steelers had a special place in her heart.

After the schools where the Sisters served were closed, Sister Regina's energies then turned to parish ministry for the remainder of her life. Chief among the duties of this ministry was visiting the sick of the parishes. Her lively nature lent itself to bringing cheer to those who were homebound, in hospitals or in nursing homes. This ministry, to which she devoted herself with great dedication, was to be her last. From there it was just another step into eternity.

Pilgrims will remember Sister Regina's familiar face at the Holupki Stand where she was always ready to greet them with joy and with a smile. In the community, Sister will be missed for her sense of humor and her infectious laughter. A friend of hers characterized this laughter as mimicking a tommy gun; thus giving her the nickname "Tommy." She herself wanted to be remembered for her deep sense of faith and trust in God. No doubt, it was this she called upon as she surrendered her life into the hands of God.

Sister Regina was preceded in death by her parents and her brother, Michael. She was the last surviving member of her immediate family.

In addition to the members of her community, she is survived by her two devoted nieces, Linda Marfino and Regina Garb and their families.

Due to the coronavirus restrictions, there will be no public viewing. All services are private and will be held in the monastery chapel at 10:30 a.m. Tuesday, February 9. Archbishop William Skurla will celebrate the Funeral Divine Liturgy with the Rev. Jerome Botsko, monastery chaplain as concelebrant.