Bringing hope of peace for Syria 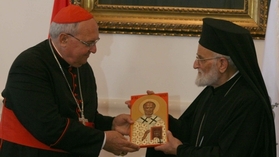 Beirut, 26 May 2013 (Apic) - Melkite Greek Catholic Patriarch of Antioch and All the East, of Alexandria and of Jerusalem, Gregorios III, surrounded by bishops from Lebanon and superiors general from religious orders, received on 25 May in Beirut Cardinal Leonardo Sandri, Prefect of the Congregation for the Oriental Churches.

The conversations between the two men touched on the regional situation in general and the future of Eastern Christians, especially in Syria, Lebanon and Palestine.

The Patriarch reiterated his appeal for church leaders from the Holy See to include Syria in their trips in the hope of seeing peace reign there one day. He hoped that the forthcoming meetings between the Council of Eastern Catholic Patriarchs (CECP) and the Congregation for the Oriental Churches would allow the peace process and Muslim-Christian dialogue to be relaunched. He hopes too for a development of ecumenical spirit between all the region’s Churches, according to the directives of the Post-Synodal Apostolic Exhortation after the Special Assembly for the Middle East of the Synod of Bishops promulgated by Pope Benedict XVI, during his trip to Lebanon, in September 2012.
Translation from French V. C.

Entrance of the Mother of God into the Temple

Today is the prelude of the goodwill of God * and the heralding of the salvation of mankind; * the Virgin appears clearly in the temple of God * and foretells Christ to all. * Let us also with a mighty voice cry out to her: * “Rejoice, O Fulfillment of the Creator’s divine plan.” (Troparion - Tone 4)

The most pure Temple of the Savior, * the most precious Bridal-Chamber and Virgin, the sacred Treasury of the glory of God, * is brought today into the house of the Lord, * bringing with her the grace that is in the Divine Spirit. * The angels of God praise her in song: * “She is the heavenly tabernacle.” (Kontakion - Tone 4)