The 42 metre square house of worship 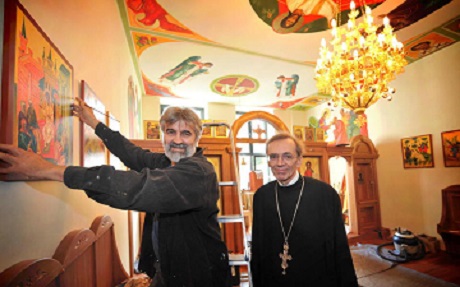 Artist Oleg Kuzenko (left) still has to apply the finishing touches to his icons and frescoes. Jesuit Father Prof. Dr. Michael Schneider supervises him as he does this, so that absolutely nothing can go wrong at the consecration of the church at St George’s on Wednesday.

From next week, Saint George’s Graduate School of Philosophy and Theology will have probably Frankfurt’s smallest church. The new house of worship, to be consecrated by Patriarch Gregorios III from Damascus, measures just 42 square metres.

"This church is something special: small, but exclusive," says artist Oleg Kuzenko while he contemplates his colourful paintings on the wall and the ceiling,  For they depict Jesus Christ, his mother Mary, the Apostles’ Communion, John the Baptist and the four evangelists’ symbols. Oleg Kuzenko created the murals and the icons for Saint George’s Graduate School of Philosophy and Theology’s new Byzantine church, which will be consecrated next Wednesday by Patriarch Gregorios III Laham of Damascus and the Limburg Bishop Thomas Loehr. It will be called "Of the Holy Cross of Jerusalem."

And it is really something special: not only because there are hardly any church consecrations nowadays, but because the new house of worship is probably also the smallest in Frankfurt, if not in the whole of Germany, since the space, which consists of an altar and a nave, measures just forty-two square metres and can accommodate some forty faithful.

“Everyone has to stand,” says, Jesuit priest Prof. Dr. Michael Schneider, who runs the Institute of History of Dogma and Liturgy as well as the Department of Byzantine Studies at the College and is responsible for the planning and design of the room. He adds, with feeling, “To be able to inaugurate and consecrate a new church is a once-in-a-lifetime experience.”

Michael Schneider has been close to the Eastern Catholic Churches since his student days, as he recounts – particularly the Melkite Greek Catholic Church, to which only about two million believers belong, but for whom the new house of worship in Oberrad aims to be a place of encounter. The Church has a strong presence in Syria, which Schneider himself has often visited, and helped develop many social projects, kindergartens and schools. The last time he went there was four years ago. In those days, when there was still no war,
"It was a really beautiful, prosperous country with contented citizens," says Schneider.

But that has long since changed. "At the beginning of construction work on our church, the influx of refugees began," says Schneider. "It therefore seemed appropriate to remember the new situation in Germany when choosing the patronage." That is why Patriarch Gregorios III Laham will also be carrying out the consecration. He is the leader of the Melkite Greek Catholic Church, and it was he who, at Frankfurt Cathedral in 2002, elevated Michael Schneider to Grand Archimandrite of the Patriarchate of Antioch. In other words: the theologian himself is a representative of the Greek Catholic Church in Germany.

A lot of money and work

Formerly there used to be a prayer-room for the Byzantine Rite in Saint George’s. However, that was in the old building of the seminary, which is currently being demolished. "Therefore, it was necessary to find a new space for worship," says Schneider. The answer came in the form of a storage room in the kitchen area of the communications building. Even though, given its parlous state, you might not have been able immediately to conceive of it as a setting for the Byzantine Liturgy, yet the room’s shape and height would have convinced you. Before the installation of the future church and the paintings could begin, a ceiling had to be plastered, walls and floor levelled, as well as new electrical wiring installed. This is no cheap enterprise when you take into account the extensive joinery by the Regensburg Woodwork Company and the artworks by Oleg Kuzenko. "It will all cost a great deal of money," says Schneider. He could not say exactly how much, but just that the church was financed by private donations.

Until the consecration of the church can be done next week, the last tool has yet to be packed away and the stained glass windows installed. They will be delivered on Saturday, so that the consecration can be performed at 5:30 p.m. on Wednesday. It is open to the public. However, you will need to allow plenty of time. The service will take up to four hours. But Schneider promises, "There is so much to see that time flies." 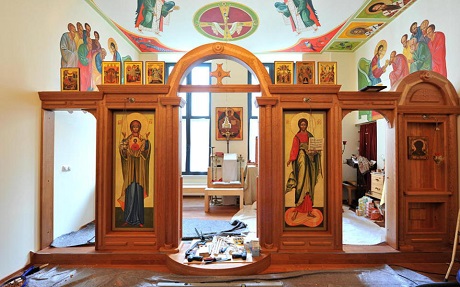 “If anyone would come after me, let him deny himself and take up his cross and follow me. For whoever would save his life will lose it, but whoever loses his life for my sake and the gospel's will save it. For what does it profit a man to gain the whole world and forfeit his soul? For what can a man give in return for his soul?" (Mark 8:34-37 ESV)

You were transfigured on the mountain, O Christ God, * showing Your glory to Your Disciples as far as they were able to bear it. * Through the prayers of the Mother of God, * let Your everlasting Light shine also upon us sinners. * O Giver of Light, glory to You! (Troparion - Tone 7)

You were transfigured upon the mountain, O Christ God, * and Your Disciples beheld Your glory as far as they could receive it, * so that when they would see You crucified, * they would understand that You suffered willingly; * and they would preach to the world * that You are truly the radiance of the Father. (Kontakion - Tone 7)

"One gives freely, yet grows all the richer; another withholds what he should give, and only suffers want." (Proverbs 11:24 ESV)

Our holy fathers have renounced all other spiritual work and concentrated wholly on this one doing, that is, on guarding the heart, convinced that, through this practice, they would easily attain every other virtue, whereas without it not a single virtue can be firmly established.