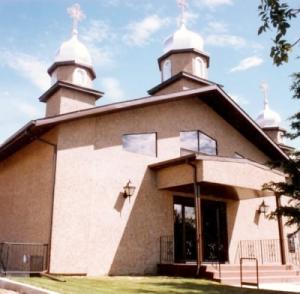 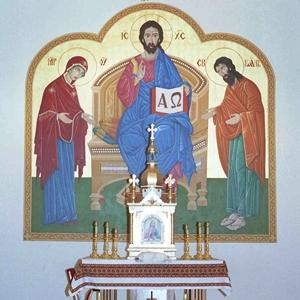 Metro Area: Lloydminster (AB - SK)
Descent of the Holy Spirit Ukrainian Greek-Catholic
5120 54A St
Lloydminster
AB
T9V 0S5
CANADA
Phone: 780-875-7802
Other: 780-808-2937
Fax: 780-875-7802
Email
http://www.hspl.ca
Rite: Byzantine
Church sui iuris: Ukrainian Greek-Catholic
Canonical Jurisdiction(s):
Metropolitan Archeparchy: Winnipeg of the Ukrainians
Eparchy: Edmonton of the Ukrainians
Mailing Address: As Above
The exterior photograph originally appeared on the parish website. It is used here with the kind permission of Father Bohdan (Nahachewsky), pastor of Descent of the Holy Spirit The interior photograph is by Andre Prevost, a Canadian iconographer who created the Deesis mural pictured, and whose work can be viewed at the website, Icons by the hand of Andre J Prevost. It is used here with Andre's kind permission
Status & Location Changes:
Formed in: 1933, meeting at the Bereziuk farm, Marshall SK
Relocated in: 1936, meeting at St Anthony (Latin) Church, Lloydminster AB
Parish erected in: 1953
This Entry Last Updated: 08/08/2014
Latitude: 53.287744
Longitude: -110.010205
Located in: Alberta | Alberta | All Active | Show All
Powered by SobiPro

[The Lord] is always knocking at the doors of our hearts, that we may open to Him, that He may enter in and rest in Our souls, and we may wash and anoint His feet, and He may make His abode with us. The Lord in that passage reproaches the man who did not wash His feet (Luke 7:44); and again He says elsewhere, "Behold, I stand at the door and knock, if any man will open unto Me, I shall come in unto him" (Rev. 3:20). To this end He endured to suffer many things, giving His own body unto death, and purchasing us out of bondage, in order that He might come to our soul and make His abode with it.. ..His food and His drink, His clothing and shelter and rest is in our souls. Therefore He is always knocking, desiring to enter into us.. Let us then receive Him, and bring Him within ourselves; because He is our food and our drink and our eternal life, and every soul that has not now received Him within and given Him rest, or rather found rest in Him, has no inheritance in the kingdom of heaven with the saints, and cannot enter into the heavenly city.. But Thou, Lord Jesus Christ, bring us thereunto, glorifying Thy name, with the Father and the Holy Spirit, for ever. Amen