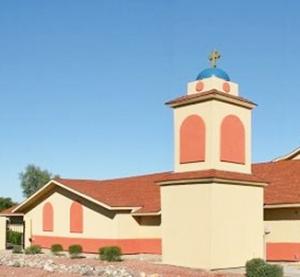 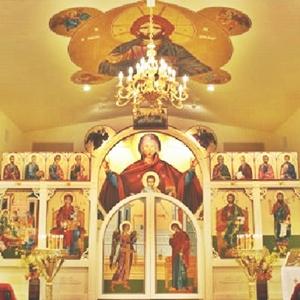 Metro Area: Phoenix (AZ)
St John of the Desert Melkite Church
3718 E Greenway Rd
Phoenix
AZ
85032-4629
USA
Phone: 602-787-4787
Other: 602-284-0040 (Emergency Only)
Fax: 602-795-4752
Email
The Official Website
Semi-Official Website
Facebook
Rite: Byzantine
Church sui iuris: Melkite Greek-Catholic
Canonical Jurisdiction(s):
Eparchy: Newton of the Melkites
Cemetery: This parish has dedicated space in a cemetery not its own
Mailing Address: As Above
Sacramental Records: In custody of the parish
Status & Location Changes:
Formed in: 1983, meeting at St Stephen Byzantine (Ruthenian) Church, Phoenix
Other Date: 1984, placed under the patronage of St John the Forerunner
Mission established in: 1984, as St John of the Desert Eastern Catholic Mission
Relocated in: 1985, to meet at St Joan of Arc (Latin) Church, Phoenix
Relocated in: 1985, to meet at St Thomas (Latin) Church, Phoenix
Parish erected in: 1986, under the patronage of St John of the Desert
Relocated in: 1986, to its present site
Status: ACTIVE CHURCH
This Entry Last Updated: 09/18/2013
Latitude: 33.626545
Longitude: -112.0015615
Located in: Arizona | Show All | Arizona | All Active
Powered by SobiPro

"The wage of the righteous leads to life, the gain of the wicked to sin." (Proverbs 10:10 ESV)

The purpose of the advent of the Saviour, when He gave us His life-giving commandments as purifying remedies in our passionate state, was to cleanse the soul from the damage done by the first transgression and bring it back to its original state. What medicines are for a sick body, that the commandments are for the passionate soul.