Liturgical Language(s): Tigrinya (may include or be supplemented by Amharic)

The Eritrean Catholic Church is a Church sui iuris of Metropolitan status, belonging to the Oriental Catholic Communion. The primatial hierarch is His Eminence, the Metropolitan Archeparch of Asmara. In addition to the metropolitan archeparchy, the Church is organized under three eparchies in Eritrea. In the diaspora, its faithful are canonically subject to the local Latin Ordinary within whose diocesan jurisdiction they reside.

The modern-day history of the Eritrean Catholic Church as a Church sui iuris dates to 19 January 2015 when it was separated from the Ethiopian (Ge'ez) Catholic Church sui iuris, within which its faithful had previously constituted a distinct ethno-cultural body. Eritrean Catholics share a common liturgical and spiritual heritage with Ethiopian (Ge'ez) Catholics, although each retain the use of linguistic and cultural praxis unique to their respective ethnic and national origins.

A photograph of Venerable Abba Felice Maria Ghebreamlak accompanies the link to listings for this Church.

Abba Felice, a hiero-monk of the Cistercian Order, was initially ordained a priest of the secular clergy. He perceived that efforts to convert his countrymen to Catholicism might be more successful under the direction of monastics, given the high regard accorded to monks in Ethiopia and Eritrea. When sent to Rome as confessor to seminarians at the Ethiopian College, he sought advice and direction regarding monastic life from those in charge of Rome's monasteries.

He was accepted by the Cistercians as a candidate in 1830. Five years later, he was permitted to make his solemn monastic profession, eight months early, after being diagnosed with incurable tuberculosis. Abba Felice reposed two months thereafter, on 8 June 1834. The Cistercians subsequently followed through on the idea proposed on his admission to their order and erected multiple monasteries in his native country.

HH John Paul II declared him to be of heroic virtue on 24 March 1992, granting him the title of 'Venerable'. His Cause for Beatification is presently before the Sacred Congregation for the Causes of Saints.

Icon: Kidane Mehret, Our Lady of the Covenant of Mercy, venerated in the West as Our Lady of Perpetual Help 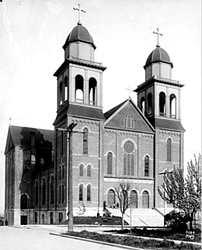 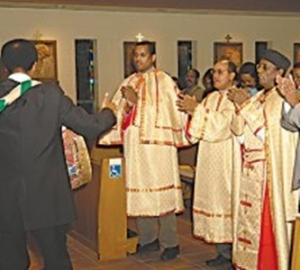