Subsequently, in the 17th century, Rome undertook misionary activity in Egypt. Theological dialogue resulted but no notable progress toward effecting communion was achieved until the mid-18th century when the Coptic Orthodox bishop of Jerusalem was received into communion by Rome and named Vicar Apostolic for the small Coptic Catholic community.

The vicariate continued in existence somewhat longer than 75 years, then was elevated to be a patriarchate (1824). As a functional canonical entity, the Catholic patriarchate survived less than a decade, after which it became a solely titular position, accorded to Latin hierarchs.

An effort was made to reestablish the patriarchate in 1895, though five years lapsed before an incumbent was named to the position. Again, it had a short-lived existence. Less than a decade after he had assumed office, the patriarch's resignation was requested because of turmoil within the Church related to his perceived favor of latinized praxis.

Another forty years passed before the patriarchate was reinstituted in 1947. It is from this time that a distinct Coptic Catholic Church can ordinarily be said to exist.

The Church is organized under a Patriarch whose title is Patriarch of Alexandria of the Catholic Copts. The incumbent is the fifth successive holder of the office, the seventh since 1824 (titular patriarchs excluded).  The Church has canonical jurisdictions only in Egypt at this time. In the diaspora, it has parishes in North America, Europe, Australia, and some countries of the Middle East; those are subject to the local Latin ordinaries of the places in which they are situated.

An icon of St Mark the Holy Apostle and Evangelist accompanies the link to listings for this Church. Historically, St Mark founded the See at Alexandria and is the patron of Coptic Christians.

Icon: St Mark the Holy Apostle and Evangelist, Patron of Coptic Christians and of Egypt. 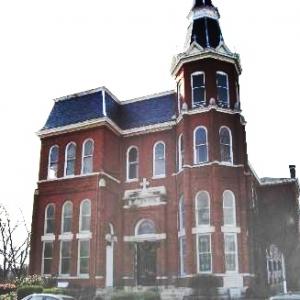 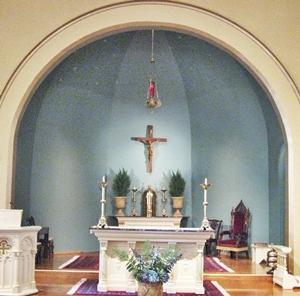 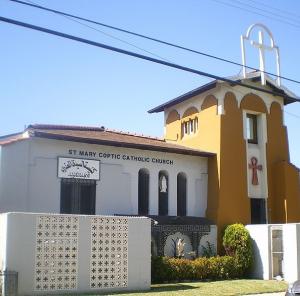 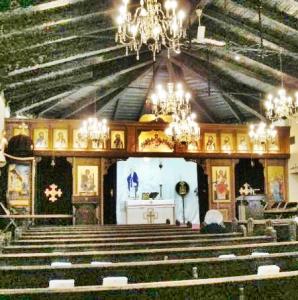 “You have heard that it was said, ‘You shall love your neighbor and hate your enemy.’ But I say to you, Love your enemies and pray for those who persecute you.” (Matthew 5:43-44 ESV)

Exaltation of the Cross

Save Your people, O Lord, and bless Your inheritance; * grant victory to Your Church over her enemies * and protect Your commonwealth by Your Cross. (Troparion - Tone 1)

Willingly lifted up on the Cross, O Christ God, * bestow Your compassions upon the new commonwealth that bears Your name. * By your power grant joy to Your Church, * granting her victory over her enemies. * May she have your Cross as the weapon of peace * and the invincible ensign of victory. (Kontakion - Tone 4)

The Church celebrates the Feast of the Exaltation of the Cross on September 14th.

Nativity of the Mother of God

Your nativity, O Virgin Mother of God, * heralded joy to all the world; * for from you has dawned the Sun of Righteousness, Christ our God, * and, having annulled the curse, He gave the blessing * and by destroying Death He granted us eternal life. (Troparion - Tone 4)

Through your holy nativity, O Immaculate One, * Joachim and Anna were freed from the reproach of childlessness, * and Adam and Eve from the corruption of death. * Delivered from the guilt of sin, your people celebrate this as they cry out to you: * "The barren woman gives birth to the Mother of God, the Nourisher of our Life." (Kontakion - Tone 4)

The Church celebrates the Feast of the Nativity of the Mother of God on September 8th.

"My son, do not despise the Lord's discipline or be weary of his reproof, for the Lord reproves him whom he loves, as a father the son in whom he delights." (Proverbs 3:11,12 ESV)

Adam, before the fall ... participated in ... divine illumination and resplendence, and because he was truly clothed in a garment of glory he was not naked, nor was he unseemly by reason of his nakedness. He was far more richly adorned than those who now deck themselves out with diadems of gold and brightly sparkling jewels. St. Paul calls this divine illumination and grace our celestial dwelling when he says, 'For this we sigh, yearning to be clothed in our heavenly habitation, since clothed we will not be found naked' (2 Cor. 5:2).

St. Gregory Palamas (Topics of Natural and Theological Science no. 67, The Philokalia Vol. 4 edited by Palmer, Sherrard and Ware; Faber and Faber pg. 377)