Russian Catholic Old Ritualists do not constitute a Church sui iuris; rather, they are a distinct body of faithful within the Russian Greek-Catholic Church sui iuris, with which they share a common spiritual heritage. However, unlike their co-religionists, who serve liturgically according to the so-called Great Russian or Synodal usage, they follow the rubrics and rituals that were retained by Orthodox Old Believers and Old Ritualists after Patriarch Nikon of Moscow 'reformed' Orthodox liturgical praxis in the 17th century.

The existence of Old Ritualists among Russian Greek-Catholics, however, traces only to the early 20th century. In 1909, Father Eustachios (Susalev), a presbyter of the Popovotsy (priested) Old Believers in Saint Petersburg, was received into union with Rome, together with his parishioners. A decade later, the Servant of God Father Patapios (Emilianov) entered communion, together with approximately a thousand parishioners of the Edinovertsie (Uniate Old Believers) Russian Orthodox parish which he pastored in Nizhnaja Bogdanovka.

Pope St Pius X declared that former Orthodox Old Believer communities entering communion with the Catholic Church retained the right to continue worshipping according to the liturgical forms that they had historically served. In 1928, Metropolitan Andrew (Sheptitsky), of blessed memory, who at the time exercised a canonical omophor in regards to Russian Greek-Catholics, clearly enunciated that the Old Believer rituals were to be preserved intact, forbidding any admixture of Synodal and pre-Nikonian praxis.

Both Fathers Eustachios and Patapios were exiled to the Siberian gulags by the Russian Communist regime and eventually martyred at its hands. It is likely that many of their parishioners suffered the same fate. Small numbers escaped to China, taking up residence in Shanghai and Harbin, where  other Russian Catholic and Orthodox emigres had also established a presence. This situation continued until the Communist Chinese takeover made it impossible to remain there.

The status of Old Ritualist Catholics in the Soviet Union itself was unknown for decades. Until Russian Greek-Catholics emerged from their virtual catacomb existence in the late twentieth century, it seemed unlikely that any organized bodies of Old Ritualists survived the eight centuries of persecution.

Entries in this section are cross-listed in that for the Russian Greek-Catholic Church.

In 1918, Father Patapios sought to enter communion with the Catholic Church. He was received, in orders, by Metropolitan Andrew and accompanied by his parishioners, numbering 852 adults. During the early '30s, Father Patapios, together with many Russian Catholic and Orthodox clergy and hierarchs, was arrested and transported to the gulags. On 14 August 1936, he was martyred in odium fidei at Nadvojtsy in the Republic of Karelia.

Painting: Detail of 'Boyarynya Morozova' by Vasily Surikov, depicting the arrest and transport to prison in chains of the defiant Russian Orthodox Old Believer and noblewoman, the Boyarynya Feodosia Prokopiyevna Morozova, martyred by starvation in 1675. 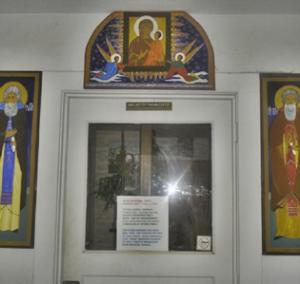