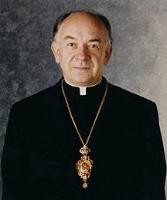 Metropolitan Basil Schott, the head of the Byzantine Catholic Archeparchy of Pittsburgh, who devoted his life to bringing people of faith closer to God -- and each other -- was laid to rest Friday.

Hundreds of people packed the Cathedral of St. John the Baptist in Munhall for the divine liturgy to honor a man who exuded warmth and caring.

"Archbishop Schott will be truly missed in Pittsburgh," said Pittsburgh Roman Catholic Bishop David Zubik in a statement after Schott's death. "A Franciscan, he reflected the deep faith and true Christian charity of St. Francis.

"We will all miss his kindness and support. But at the same time we cannot help but recall and celebrate a life of goodness, gentleness and faithful dedication."

Schott, the head of the Byzantine Catholic Archeparchy of Pittsburgh since 2002, died of cancer on June 10. He was 70.

Many of the people who knew Metropolitan Basil Schott say the trappings that come with heading the Byzantine Catholic Archeparchy of Pittsburgh never diminished his desire to live the simple life of spirituality that drew him to ministry as a young man.

"He was a very humble, unpretentious man who overflowed with warmth and caring for people," said the Rev. Donald Green, executive director of Christian Associates of Southwestern Pennsylvania. "Even when there were disagreements between us about how various churches viewed things, he always was quick to remind us that we are all brothers and sisters."

Metropolitan Archbishop Basil Myron Schott died Thursday, June 10, 2010. He was 70. The archbishop was diagnosed with cancer last year, according to the Rev. Dennis Bogda, rector of the Cathedral of St. John the Baptist in Munhall.

"My son, do not forget my teaching, but let your heart keep my commandments, for length of days and years of life and peace they will add to you." (Proverbs 3:1,2 ESV)

While the Bridegroom tarried, they slumbered and slept: Give ear, ye prudent, to our Lord's parable, for it is all light. All of them slept, both the foolish and the wise -- Which signifies that the good and the wicked die until the resurrection. The same sleep comes upon the ten of them, which is as much as to say, That death is the same for all creation without distinction. One was the sleep of the wise and of the foolish, For one is death, both of the righteous and of sinners. The good die, as the wise virgins slept; And the bad die, as the foolish also slept. Behold, all creation looketh for the coming of the Bridegroom, Christ, Who cometh at the end with His angels. But since He hath tarried, all generations slumber and sleep with the sleep of death, while looking for when He cometh.

A Homily on the Ten Virgins by Mar Jacob, Bishop of Serugh