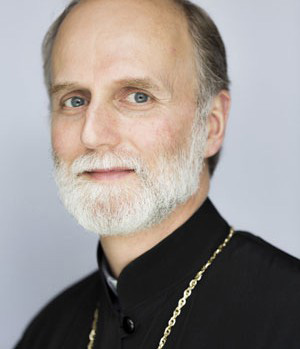 (RISU) On February 18, the Holy See announced that Pope Francis, accepting the recommendation of the Synod of Bishops of the Ukrainian Greek Catholic Church (UGCC), has appointed Bishop Borys Gudziak, Eparch of the Eparchy of Saint Volodymyr the Great in Paris, as Metropolitan and Archbishop of the Ukrainian Catholic Archeparchy of Philadelphia.

Bishop Hlib Lonchyna, Eparch of Holy Family Eparchy in London, has been appointed Apostolic Administrator of the Paris Eparchy.

Bishop Borys Gudziak lead the Eparchy of Saint Volodymyr the Great that serves the Ukrainian Greek Catholic faithful in France, Belgium, the Netherlands, Luxembourg, and Switzerland since January 19, 2013. On that day, Pope Benedict XVI elevated the Apostolic Exarchate for Ukrainian Catholics of the Byzantine Rite to the rank of Eparchy and Bishop Borys was appointed as its first eparch. He previously held the position of the Apostolic Exarch, to which he was appointed on July 21, 2012. His episcopal ordination took place in Saint George Cathedral in Lviv on August 26, 2013, and enthronement on December 2, 2012, at the Cathedral of Notre Dame in Paris. Before his episcopal nomination he was rector of the Ukrainian Catholic University in Lviv, as well as one of its founders.

Bishop Borys Gudziak was born in 1960 in Syracuse, New York, in a family of refugee immigrants from Ukraine. He studied at Syracuse University and in Rome in the circle of Patriarch Josyf Slipyj. Bishop Borys earned his doctoral degree in Slavic and Byzantine Studies from Harvard University.

“The Lord has led me to serve in different countries. I’ve accepted this nomination in freedom and peace. Wholeheartedly I would like to serve my brothers in episcopal ministry, clergy, religious, and faithful of Philadelphia Metropolia. To start a new life at 58 is a huge gift from God and a sacred privilege. I wish to lead the metropolia and archeparchy first of all by listening. This is the land where I was born and baptised, where my parents died and were buried. However, for the last 30 years I lived and served in Europe. Many things have changed, there are numerous challenges both in the Church and society, but I believe that the Lord, who called me to this new service, will lead me and the people entrusted to my care. Primarily, I wish to be their brother, father, and pastor”, commented Bishop Borys.

The enthronement of new metropolitan and archbishop will be held in the Cathedral of the Immaculate Conception in Philadelphia on June 4, 2019.

Borys Gudziak was born in 1960 in Syracuse, New York, the son of immigrants from Ukraine. He earned a bachelor’s degree in philosophy and biology from Syracuse University in 1980 and then studied in Rome, in the circle of Patriarch Josyf Slipyj. He received a STB degree in theology from the Pontifical Urban University in 1983 and then returned to America to pursue a doctorate in Slavic and Byzantine Cultural History at Harvard University, which he successfully defended in 1992. In 1995 he earned a licentiate in Eastern Christian studies from the Pontifical Oriental Institute.

In 1992, he moved to Lviv where he founded and directed (1992-2002) the Institute of Church History. In 1993, he was appointed Chairman of the Commission for the Renewal of the Lviv Theological Academy. From 1995 until 2000, he served as Vice Rector of the Lviv Theological Academy, then as Rector from 2000 to 2002. In that year, Gudziak became Rector of the Ukrainian Catholic University (founded on the basis of the Academy), and in 2013 its President.

Bishop Hlib Lonchyna was born in the USA in 1954. He attended Immaculate Conception Ukrainian Catholic Schools in Detroit, as well as the School of Ukrainian Language and Culture.

He studied philosophy and theology at the Urban University in Rome (1971-1979), and defended his doctoral thesis at the Oriental Institute in Rome (2001).

In 1975 he entered the Studite Monastery in Grottaferrata (Rome) аnd professed final vows in 1976. Ordained to the Holy Priesthood by Patriarch Joseph Slipyj in 1977. Was associate pastor (1983-85) and pastor (1990-92) of St Nicholas Church in Passaic, NJ.