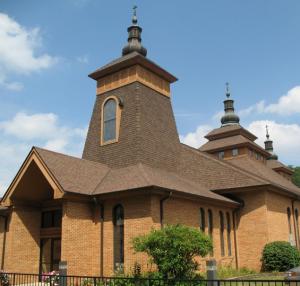 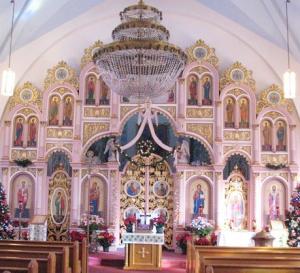 Metro Area: Chicago (IL)
Nativity of the Blessed Virgin Mary Ukrainian Greek-Catholic Church
8530 W 131st St
Palos Park
IL
60464-2124
USA
Phone: 708-361-8876
Fax: 708-361-8820
FrBasilSal@aol.com
Rite: Byzantine
Church sui iuris: Ukrainian Greek-Catholic
Metropolitan Archeparchy: Philadelphia of the Ukrainians
Eparchy: St Nicholas in Chicago of the Ukrainians
Mailing Address: As Above
The interior photograph is by Lawrence, a member of the parish and of the Byzantine Forum community - where he posts under that name. It originally appeared on the Forum's Photo Gallery. The exterior photograph is also by Lawrence and is used here with his kind permission.
Status & Location Changes:
Parish erected in: 1911
This Entry Last Updated: 01/11/2010
Latitude: 41.653742
Longitude: -87.8285779
Located in: Illinois | All Active | Show All | Illinois
Powered by SobiPro

Exaltation of the Cross

Save Your people, O Lord, and bless Your inheritance; * grant victory to Your Church over her enemies * and protect Your commonwealth by Your Cross. (Troparion - Tone 1)

Willingly lifted up on the Cross, O Christ God, * bestow Your compassions upon the new commonwealth that bears Your name. * By your power grant joy to Your Church, * granting her victory over her enemies. * May she have your Cross as the weapon of peace * and the invincible ensign of victory. (Kontakion - Tone 4)

The Church celebrates the Feast of the Exaltation of the Cross on September 14th.