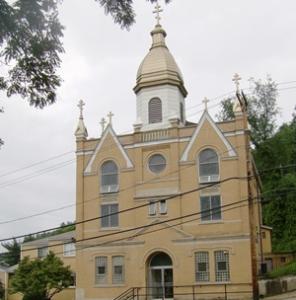 Metro Area: Pittsburgh (PA)
St John the Baptist Greek Catholic (Ruthenian)
Historical Entry: Translated to Orthodoxy, Re-established, Renamed, Relocated
Formerly at:
211 Cable Ave
East Pittsburgh
PA
15112-1201
USA
Rite: Byzantine
Church sui iuris: Byzantine Ruthenian Catholic
Apostolic Exarchate: US, Faithful of the Oriental Rites (Ruthenian)
The exterior photograph above is of the temple from which the Byzantine Catholics departed in 1926 and which became and remains St John the Baptist Orthodox Church (ACROD).
Status & Location Changes:
Formed in: 1900
Other Date: 1926 translated to Orthodoxy under the American Carpatho-Russian Orthodox Diocese
Mission established in: 1926 by those remaining subject to the Apostolic Exarchate of the US (Ruthenian)
Relocated in: 1926 to meet at St Helen (Latin) Church, Ridge Ave, East Pittsburgh PA
Renamed in: 1926 as St Mary Greek Catholic Mission
For this church, this is entry 1
of 2
http://www.byzcath.org/index.php/find-a-parish-mainmenu-111?sobi2Task=sobi2Details&catid=87&sobi2Id=74
This Entry Last Updated: 02/01/2010
Latitude: 40.399941
Longitude: -79.836404
Located in: Show All | Pennsylvania | All Historical
Powered by SobiPro

“You have heard that it was said, ‘You shall love your neighbor and hate your enemy.’ But I say to you, Love your enemies and pray for those who persecute you.” (Matthew 5:43-44 ESV)

“The legalization of the termination of pregnancy is none other than the authorization given to an adult, with the approval of an established law, to take the lives of children yet unborn and thus incapable of defending themselves. It is difficult to imagine a more unjust situation, and it is very difficult to speak of obsession in a matter such as this, where we are dealing with a fundamental imperative of every good conscience — the defense of the right to life of an innocent and defenseless human being.”